Falana was announced as the sole African performer at 2019 Global Citizen Prize awards high-level event which was held ahead of the award concert which featured Jennifer Hudson, John Legend, others.

Nigerian-Canadian singer, Victoria Falana, better known by her stage name Falana, continues in giant strides as she performs at the Global Citizen Prize award High-level event held at Kensington Pavilion Royal, South Kensington, London. The event was also attended by Tunde and Rene Folawiyo, Aigboje Aig-Imoukhuede and his wife as representatives of the Global Citizen Nigeria, and award winner, Deputy UN Secretary-General Amina Mohammad and US star, Raphael Saadiq alongside the other UK and US celebrities.

The Afrobeat/Alternative-soul singer delivered an incredible performance at the high-level event ahead of attending the concert as a special guest that saw performances from top American and British singers such as Jennifer Hudson, John Legend, Raphael Saadiq, Sting, Stormzy, Chris Martin and H.E.R.)

The event held by London-International advocacy organization, Global Citizen, to award individuals who have made efforts to eradicate extreme poverty in the world in their capacities also awarded English musician/actor, Sting with the Global Citizen Artist of the Year prize for using his platform to champion the course of protecting the world’s rainforests. As well as announcing Lagos as the venue for its 2020 edition of its annual festival.

Falana‘s performance which featured a cover of UK sensation Lewis Capaldi and Sia, as well as new songs from her forthcoming debut album, led to a standing ovation from the celebrity audience. 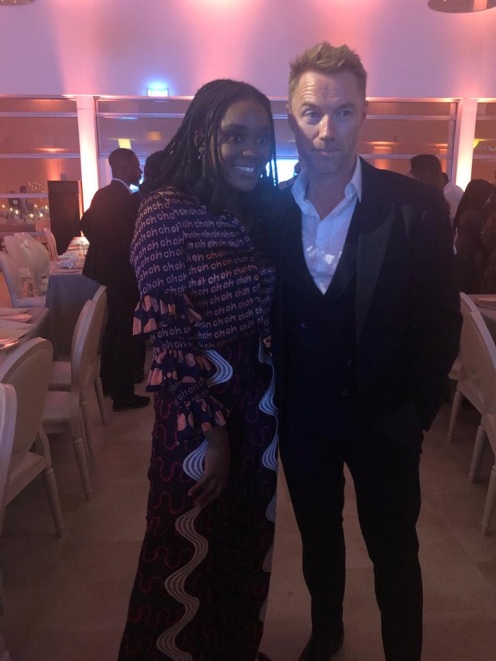 Falana with Ronan Keetinv after her incredible performance

Falana with Raphael Saadiq after her incredible performance